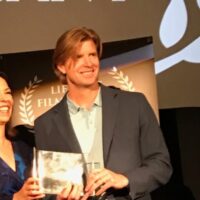 Retirement income and annuities are getting the Hollywood treatment, sort of.

Film director Doug Orchard recently released The Baby Boomer Dilemma, a feature-length documentary. It received a PG rating from the Motion Picture Association and premiered Oct. 14 in Salt Lake City. Major theater chains are running the movie in major markets but at specific times and by invite only, so it may not be showing at a theater near you.

“This is an accurate mirror of reality,” said Orchard in an interview. “I think it will reframe an awful lot moving forward.”

Orchard, 52, knows a few things about the danger of having too much risk sitting in a 401(k). The former technology industry recruiter saw his retirement plan holdings plummet 90% when the “dot-bomb” bubble bust more than 20 years ago.

Orchard financed The Baby Boomer Dilemma on a shoestring, raising $310,000 in small amounts of no more than $15,000 from donors whose identities he didn’t know, to preserve the independence of his vision. He’s done other movies about financial topics, including one on the federal debt, and another on mergers and acquisitions is slated for release this year.

Dilemma made $170,000 on opening night and has since sold about $380,000 through licenses and gift cards for the movie, he said. More than 5,000 advisors have watched free previews, he said.

At the film’s premiere, about 130 people showed up and half the audience was “run of the mill” first-time viewers with little idea of what the film was about, then afterwards they were motivated to speak with someone about annuities, said Orchard.

“Financial advisors came in tuxes and everybody else came in jeans and sweatshirts,” said Orchard. “It was really obvious who the financial advisors were.” The audience was alerted to the movie through social media and word of mouth from investors, he said.

The documentary is being distributed through movie houses and financial advisors. In the fall, it will be distributed through other means such as Amazon, iTunes and Google Play, he said. Right now it can be found selling online for $29.99 on reelhouse.org.

While insurance carriers haven’t shown any interest in the movie, independent marketing organizations and dozens of advisors have approached him. Financial advisors are encouraging prospects to watch the movie in lieu of annuity dinner seminars, he said. About 100 agents are slated to show the movie this week by booking theater space, Orchard said.

“The last two weeks of January it came alive,” he said. Mail houses that reach about 40,000 advisors have created campaigns and QR codes, and university professors want to add the documentary to their curriculum, he said.

The fictional story at the heart of his latest documentary involves a Florida driving instructor whose family has to choose between two state-sponsored retirement plans only to see their plans derailed when, after selecting the riskier plan, the stock market drops two months before his planned retirement. Documentary footage and interviews are interspersed.

In a final climactic scene, done in one take, a screaming match ensues under a Florida downpour. The scene was so intense, “I thought she was going to hit him,” Orchard recalled.